1. What are the common physical and chemical features of alkali metals?

(1) They are quite soft and can be cut easily. Sodium metal can be easily cut using a knife.(2) They are light coloured and are mostly silvery white in appearance.(3) They have low density because of the large atomic sizes. The density increases down the group from Li to Cs. The only exceptionto this isK, which has lower density than Na.(4) The metallic bonding present in alkali metals is quite weak. Therefore, they have low melting and boiling points.(5) Alkali metals and their salts impart a characteristic colour to flames. This is because the heat from the flame excites the electron present in the outermost orbital to a high energy level. When this excited electron reverts back to the ground state, it emits excess energy as radiation that falls in the visible region.(6) They also display photoelectric effect. When metals such as Cs and K are irradiated with light, they lose electrons.

Alkali metals are highly reactive due to their low ionization enthalpy. As we move down the group, the reactivity increases.

(3) They react with dihydrogen to form metal hydrides. These hydrides are ionic solids and have high melting points.

Since Li+ion is very small in size, it can easily distort the electron cloud around the negative halide ion. Therefore, lithium halides are covalent in nature.(5) They are strong reducing agents. The reducing power of alkali metals increases on moving down the group. However, lithium is an exception. It is the strongest reducing agent among the alkali metals. It is because of its high hydration energy.(6) They dissolve in liquid ammonia to form deep blue coloured solutions. These solutions are conducting in nature.

The ammoniated electrons cause the blue colour of the solution. These solutions are paramagnetic and if allowed to stand for some time, then they liberate hydrogen. This results in the formation of amides.

In a highly concentrated solution, the blue colour changes to bronze and the solution becomes diamagnetic.

2. Discuss the general characteristics and gradation in properties of alkaline earth metals.

Ans. General characteristics of alkaline earth metals are as follows.

.(ii) These metals lose two electrons to acquire the nearest noble gas configuration. Therefore, their oxidation state is +2.(iii) These metals have atomic and ionic radii smaller than that of alkali metals. Also, when moved down the group, the effective nuclear charge decreases and this causes an increase in their atomic radii and ionic radii.(iv) Since the alkaline earth metals have large size, their ionization enthalpies are found to be fairly low. However, their first ionization enthalpies are higher than the corresponding group 1 metals.(v) These metals are lustrous and silvery white in appearance. They are relatively less soft as compared to alkali metals.(vi) Atoms of alkaline earth metals are smaller than that of alkali metals. Also, they have two valence electrons forming stronger metallic bonds. These two factors cause alkaline earth metals to have high melting and boiling points as compared to alkali metals.(vii) They are highly electropositive in nature. This is due to their low ionization enthalpies. Also, the electropositive character increases on moving down the group from Be to Ba.(viii) Ca, Sr, and Ba impart characteristic colours to flames.

In Be and Mg, the electrons are too strongly bound to be excited. Hence, these do not impart any colour to the flame.The alkaline earth metals are less reactive than alkali metals and their reactivity increases on moving down the group. Chemical properties of alkaline earth metals are as follows.(i) Reaction with air and water: Be and Mg are almost inert to air and water because of the formation of oxide layer on their surface.(a) Powdered Be burns in air to form BeO and

.(b) Mg, being more electropositive, burns in air with a dazzling sparkle to form MgO and

(iii) All the alkaline earth metals, except Be, react with hydrogen to form hydrides.(iv) They react readily with acids to form salts and liberate hydrogen gas.

(v) They are strong reducing agents. However, their reducing power is less than that of alkali metals. As we move down the group, the reducing power increases.(vi) Similar to alkali metals, the alkaline earth metals also dissolve in liquid ammonia to give deep blue coloured solutions.

3. Why are alkali metals not found in nature?

Ans. Alkali metals include lithium, sodium, potassium, rubidium, cesium, and francium. These metals have only one electron in their valence shell, which they lose easily, owing to their low ionization energies. Therefore, alkali metals are highly reactive and are not found in nature in their elemental state.

4. Find the oxidation state of sodium in

Therefore, the oxidation sate of sodium is +1.

5. Explain why is sodium less reactive than potassium?

Ans. In alkali metals, on moving down the group, the atomic size increases and the effective nuclear charge decreases. Because of these factors, the outermost electron in potassium can be lost easily as compared to sodium. Hence, potassium is more reactive than sodium.

6. Compare the alkali metals and alkaline earth metals with respect to (i) ionization enthalpy (ii) basicity of oxides and (iii) solubility of hydroxides. 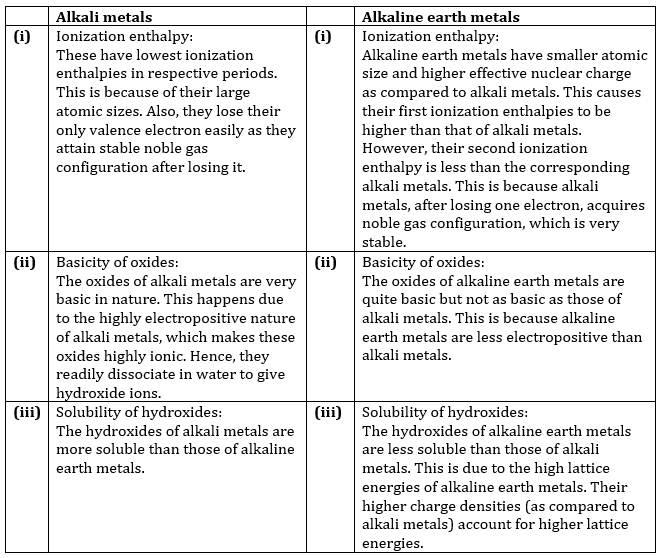 7. In what ways lithium shows similarities to magnesium in its chemical behaviour?

Ans. Similarities between lithium and magnesium are as follows.

(i) Both Li and Mg react slowly with cold water.

(ii) The oxides of both Li and Mg are much less soluble in water and their hydroxides decompose at high temperature.

(iii) Both Li and Mg react with

(iv) Neither Li nor Mg form peroxides or superoxides.

(v) The carbonates of both are covalent in nature. Also, these decompose on heating.

(vi) Li and Mg do not form solid bicarbonates.

(vii) Both LiCl and

are soluble in ethanol owing to their covalent nature.

(viii) Both LiCl and

deliquescent in nature. They crystallize from aqueous solutions as hydrates, for example,

9. Why are potassium and cesium, rather than lithium used in photoelectric cells?

Ans. All the three, lithium, potassium, and cesium, are alkali metals. Still, K and Cs are used in the photoelectric cell and not Li.

This is because as compared to Cs and K, Li is smaller in size and therefore, requires high energy to lose an electron. While on the other hand, K and Cs have low ionization energy. Hence, they can easily lose electrons. This property of K and Cs is utilized in photoelectric cells.

10. When an alkali metal dissolves in liquid ammonia the solution can acquire different colours. Explain the reasons for this type of colour change.

Ans. When an alkali metal is dissolved in liquid ammonia, it results in the formation of a deep blue coloured solution.

The ammoniated electrons absorb energy corresponding to red region of visible light. Therefore, the transmitted light is blue in colour.

At a higher concentration (3 M), clusters of metal ions are formed. This causes the solution to attain a

colour and a characteristic metallic lustre.

11. Beryllium and magnesium do not give colour to flame whereas other alkaline earth metals do so. Why?

Ans. When an alkaline earth metal is heated, the valence electrons get excited to a higher energy level. When this excited electron comes back to its lower energy level, it radiates energy, which belongs to the visible region. Hence, the colour is observed. In Be and Mg, the electrons are strongly bound. The energy required to excite these electrons is very high. Therefore, when the electron reverts back to its original position, the energy released does not fall in the visible region. Hence, no colour in the flame is seen.

12. Discuss the various reactions that occur in the Solvay process.

This ammoniated brine is filtered to remove any impurity.

Step 2: Carbon dioxide is reacted with this ammoniated brine to result in the formation of insoluble sodium hydrogen carbonate.

Step 3: The solution containing crystals of

is filtered to obtain

is heated strongly to convert it into

Step 5: To recover ammonia, the filtrate (after removing

The overall reaction taking place in Solvay process is

13. Potassium carbonate cannot be prepared by Solvay process. Why?

Ans. Solvay process cannot be used to prepare potassium carbonate. This is because unlike sodium bicarbonate, potassium bicarbonate is fairly soluble in water and does not precipitate out.

decomposed at a lower temperature whereas

Ans. As we move down the alkali metal group, the electropositive character increases. This causes an increase in the stability of alkali carbonates. However, lithium carbonate is not so stable to heat. This is because lithium carbonate is covalent. Lithium ion, being very small in size, polarizes a large carbonate ion, leading to the formation of more stable lithium oxide.

15. Compare the solubility and thermal stability of the following compounds of the alkali metals with those of the alkaline earth metals. (a) Nitrates (b) Carbonates (c) Sulphates.

Nitrates of alkali metals, except

As we move down group 1 and group 2, the thermal stability of nitrate increases.

Nitrates of both group 1 and group 2 metals are soluble in water.

. Also, the solubility increases as we move down the group.

Carbonates of alkaline earth metals are insoluble in water.

Sulphates of both group 1 and group 2 metals are stable towards heat.

In other words, while moving down the alkaline earth metals, the solubility of their sulphates decreases.

Ans. (a) Sodium can be extracted from sodium chloride by Downs process.

This process involves the electrolysis of fused NaCl (40%) and

Steel is the cathode and a block of graphite acts as the anode. Metallic Na and Ca are formed at cathode. Molten sodium is taken out of the cell and collected over kerosene.

(ii) Sodium hydroxide can be prepared by the electrolysis of sodium chloride. This is called

process. In this process, the brine solution is electrolysed using a carbon anode and a mercury cathode.

The sodium metal, which is discharged at cathode, combines with mercury to form an amalgam.

First, NaCl is electrolysed to result in the formation of Na metal (Downs process).

This sodium metal is then heated on aluminium trays in air (free of CO2) to form its peroxide.

These sodium hydrogen carbonate crystals are heated to give sodium carbonate.

17. What happens when (i) magnesium is burnt in air (ii) quick lime is heated with silica (iii) chlorine reacts with slaked lime (iv) calcium nitrate is heated ?

Ans. (i) Magnesium burns in air with a dazzling light to form MgO and

(iii) When chloride is added to slaked lime, it gives bleaching powder.

(iv) Calcium nitrate, on heating, decomposes to give calcium oxide.

Ans. (i) Uses of caustic soda

(a) It is used in soap industry.

(b) It is used as a reagent in laboratory.

(a) It is generally used in glass and soap industry.

(b) It is used as a water softener.

(a) It is used as a starting material for obtaining slaked lime.

(b) It is used in the manufacture of glass and cement.

Ans. (a) Structure of

exists as a polymer in condensed (solid) phase.

In the vapour state,

exists as a monomer with a linear structure.