Biological classification is the scientific procedure of arranging organisms into groups and subgroups on the basis of their similarities and dissimilarities and placing the group in a hierarchy of categories.

Artificial system of classification– Only one or two morphological characters for grouping of organism is used. Flowering and non-flowering plants, enaima and anaima. Aristotle classification.

Phylogenetic System of Classification– Based on the evolutionary relationship of organisms. In this system organism are classified on the basis of their evolution on earth from primitive to highly evolved. Engler and Prantl classification and Hutchinson classification, etc.

Depending upon the type of system of classification organism are classified into following kingdom system.

Bacteria are the most abundant micro-organism that can survive in all kinds of climate.

Eubacteria – They are called as true bacteria. They contain rigid cell wall, if motile contain flagellum. Cyanobacteria or blue-green algae are gram positive photosynthetic bacteria. They contain chlorophyll a and carotenoids. They may be unicellular, colonial or filamentous, fresh water, marine or terrestrial. Some of them have specialized heterocyst cells to perform nitrogen fixation (Nostoc and Anabaena).

Heterotrophic bacteria are most abundant and act as decomposer. They are helpful in production of curd, antibiotic and fixing nitrogen in leguminous plants. Some of them are pathogenic and cause disease like cholera, typhoid, tetanus and citrus canker.

Mycoplasma – they are the simplest free living prokaryotes. They are also known as PPLO (Pleuropneumonia like organism). They lack cell wall and can survive without oxygen. They cause disease in plants and animals. 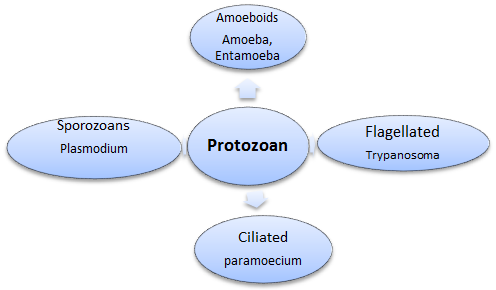 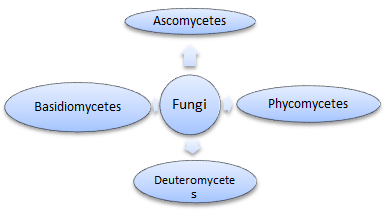 Five kingdom system of classification do not includes Virus, Viroids and Lichens.

Lichens are symbiotic association between algae and fungi. The algal part is called Phycobiont and fungal parts are called Mycobiont. They are good pollution indicator as they do not grow in polluted area.