1. What is meant by modification of root? What type of modification of root is found in the(a) Banyan tree(b) Turnip(c) Mangrove treesAns. Main function of the roots is to absorb water and minerals from the soil. However, roots are also modified to perform various other functions. The roots of some plants act as storage sites for food, some provide support to massive plant structures, while others absorb oxygen from the atmosphere.Roots and its modifications in various plants:(a) Banyan tree : Prop roots.(b) Turnip : Storage of food.(c) Mangrove tree : Pneumatophores.

2. Justify the following statements on the basis of external features(i) Underground parts of a plant are not always roots(ii) Flower is a modified shootAns. (i) Various parts of plants are modified into underground structures to perform various functions such as stems, leaves, and even fruits. The stems in ginger and banana are underground and swollen due to storage of food. They are called rhizomes. Similarly, corm is an underground stem in Colocasia and Zamin-khand. The tips of the underground stem in potato become swollen due to the accumulation of food and forms tuber. Tubers bear eyes, which are subtended by a leaf scar. Basal leaves in onions become fleshy because of the accumulation of food. In peanuts, the flower after fertilization gets pushed inside the soil by growing a flower stalk. The formation of fruits and seeds takes place inside the soil.

(ii) During the flowering season, the apical meristem gives rise to the floral meristem. The axis of the stem gets condensed, while the internodes lie near each other. Instead of leaves, various floral appendages arise from the node. Therefore, it can be said that the flower is a modified shoot.

4. Explain with suitable examples the different types of phyllotaxy?Ans. Phyllotaxy is of three types, alternate, opposite, and whorled phyllotaxy.In alternate phyllotaxy, a single leaf arises from the node of a branch. This type of phyllotaxy is observed in the sunflower, mustard, and peepal.

Plants with opposite phyllotaxy have two leaves arising from the node in opposite directions. It is found in guava and jamun plants.

Plants with whorled phyllotaxy have three or more leaves arising from the node. It is found in Alstonia.

5. Define the following terms:(a) Aestivation(b) Placentation(c) Actinomorphic(d) Zygomorphic(e) Superior ovary(f) Perigynous flower(g) Epipetalous StamenAns. (a) Aestivation: The term ‘aestivation’ refers to the mode in which sepals or petals are arranged in a floral bud with respect to other floral members. There are four types of aestivation in plants i.e., valvate, twisted, imbricate, and vexillary.(b) Placentation: The term ‘placentation’ refers to the arrangement of ovules within the ovary of a flower. It is primarily of five types, namely marginal, basal, parietal, axile, and free central.(c) Actinomorphic: Actinomorphic flowers can be divided into two radial halves by any radial plane passing through its centre. Examples of these flowers include chilly and mustard.(d) Zygomorphic: Zygomorphic flowers are those flowers which can be divided into two similar halves by a single vertical plane. Examples of these flowers include pea and beans.(e) Superior ovary: Superior ovary flowers are those flowers in which the gynoecium is present at the highest position, while other floral parts are arranged below it. A flower with this arrangement is described as hypogynous. Examples include brinjal and mustard.(f) Perigynous flower: In perigynous flowers, the gynoecium is present in the centre and the rest of the floral parts are arranged at the rim of the thalamus at the same level. Examples include plum and rose.(g) Epipetalous Stamen: Epipetalous stamens are stamens attached to the petals. They are found in brinjal.

Ans. (a) Racemose and cymose inflorescences:

(b) Fibrous and adventitious roots: 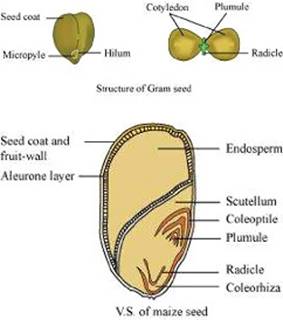 8. Describe modifications of stem with suitable examplesAns. Stems of various plants have undergone modifications to perform different functions.Underground stems or storage stems: Examples: Rhizomes, Corms, tubers In ginger and banana, the underground stem is called a rhizome. The underground stem in Colocasia (arvi) is known as corm. Rhizomes and corms are underground stems, modified for the storage of food. Also, these stems help in vegetativereproduction of these plants. The tips of the underground stem in potato plants become swollen due to the accumulation of food. The potato is a tuber that helps in the storage of food and bears eyes on it. Subtended by a leaf scar, these eyes bear buds that give rise to new plants.Supporting stem: The stem in some weak plants bear thin, slender, and spirally-coiled structures called tendrils that help the plant get attached to nearby structures for support. Tendrils are found in cucumbers, melons, and other members of the family Cucurbitaceae.Protective stems : The stem in bougainvillea and citrus plants (like lemon and orange) bear sharp, pointed structures called thorns, which provide protection to the plant from herbivores.Photosynthetic stems: The stem in the Opuntia is green. It carries out the process of photosynthesis in the absence of leaves.Others stem modifications : In some plants, underground stems such as grasses spread in the soil and help in perenation. These stems are called runners.The short lateral stem called the offset in some aquatic plants (such as Eichhornia) bears leaves and tufts of roots at the node and gives rise to new plants.

9. Take one flower each of families Fabaceae and Solanaceae and write its semi-technical description. Also draw their floral diagrams after studying them.Ans. (1) Family Fabaceae/Papilionaceae (pea plantFabaceae/Papilionaceae is a sub-family of the Leguminoseae family.Vegetative features: Habit: Pinnately compound, alternately arranged with leaf tendrils with the pulvinus present at the leaf base along folacious stipules.Root: Tap root system with root nodules.Floral features:Inflorescence: Racemose, generally axial than terminal Flower: Zygomorphic and bisexual flowers are foundCalyx: It contains five sepals which are gamosepalous while aestivation is imbricate. Corolla: It contains five petals (polypetalous) with vexillary aestivation. Androecium: It consists of ten anthers that are diadelphous with dithecous anthers. Gynoecium: Monocarpellary superior ovary which is unilocular with marginal placentation.Fruit: Legume pod with non-endospermic seedsFloral formula: 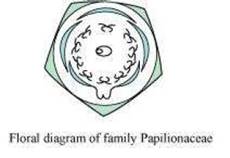 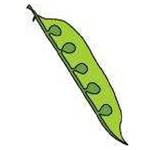 In axile placentation, the placenta is axial and ovules are attached to it. Examples include China rose, lemon, and tomato. 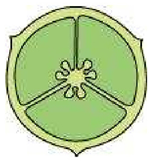 (D) Basal placentationThe ovary in which the placenta develops from its base and a single ovule is found attached to the base is said to have basal placentation. It is found in marigold and sunflower. 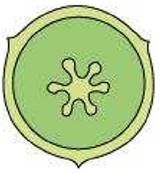 11. What is a flower? Describe the parts of a typical angiosperm flower?Ans. A flower can be defined as the reproductive unit of any flowering plant. Flowers carry out sexual reproduction in angiosperms. A typical flower is a modified stem with a condensed axis. A flower has four different parts i.e., the calyx, corolla, androecium, and gynoecium. Androecium and gynoecium represent the male and female reproductive organs of a flower (respectively). Bisexual flowers are those which contain both androecium and gynoecium, while unisexual flowers contain either gynoecium or androecium. The corolla and the calyx are generally distinct, but may sometimes be fused (called perianth). A flower that contains all four floral parts is called a complete flower.Parts of flowers(A) The calyx forms the outermost whorl of a flower, which contains sepals. They are green, leaf–like structures that cover and protect the flowers during the bud stage. When the sepals of a flower are free, they are called polysepalous, while fused sepals of a flower are called gamosepalous.(B) The corolla of a flower is a layer that lies inside the calyx. It contains beautifully coloured petals, which help in attracting insects for pollination. When the petals are free, they are called polypetalous, while fused petals are called gamopetalous.(C) The androecium or the stamen is the male reproductive part of a flower. It consists of two parts, the filament and the bilobed anther. The bilobed anther is the site for meiosis and the generation of pollen grains.(D) Gynoecium represents the female reproductive part of a flower. It consists of an ovary. The ovary is connected by a long tube (called style) to the stigma. The ovary bears numerous ovules attached to the placenta.

14. Write the floral formula of an actinomorphic bisexual, hypogynous flower with five united sepals, five free petals. Five free stamens and two united carpals with superior ovary and axile placentation.Answer The floral formula of the described flower is represented as:

Actinomorphic flowers are represented by the symbol

.A bisexual flower is indicated by

The calyx contains five united sepals which can be represented as

The androecium consists of five free stamens and is represented by

The gynoecium consists of a superior ovary with two united carpels and axile placentations, which can be represented as