1. Name one monocot & one dicot in which endosperm is present?

2. Why are date palm referred to as dioecious?

4. What is Rhizome? Give its two examples.

6. Give reason to justify that onion bulb is a modified stem?

7. Describe that parts of a typical angiospermic leaf?

8. Differentiate between a maize grain & a bean seed?

1. Monocot: Maize grain & Dicot: castor oil seed.2. Because male & female flowers being produced in clusters on separate palms.3. The arrangement of placenta ovules on the ovary wall is called placentation.4. Rhizome is a prostrate & a thickened underground stem having distinct nodes, internodes scales, leaves as well as buds. It creeps horizontally under the ground eg. Ginger, turmeric.5.

6. Onion bulb is a modified stem because : a) It has a large number of fleshy scale leaves.  b) Terminal & auxiliary buds are present.  c) On the lower posterior side, a cluster of adventitious roots are present. 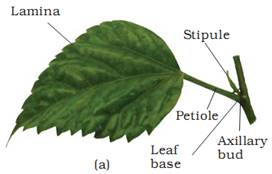 i) LEAF BASE:- It is the region in the stem, from which leaf arises. Its main function is to attach the leaf with the stem are a branch.ii) PETIOLE:- The stalk of a leaf is called petiole. The leaves having petiole is called petiolate. As in banyan leaf, some leaves may lack petioles.iii) LAMINA:- The green, flattened part of the leaf attached with petiole is known as “lamina”. It is the part which performs photosynthesis, respiration & transpiration. There is a “midrib” in the middle of the lamina. The midrib in compound leaf is called rachis. The lamina may be of different shapes in different kinds of leaves.  8.

9. The arrangement of placenta ovules on the ovary wall is called placentation.The various types of placentations found in flowering plants are:-i) Marginal :- Ovary one chambered and ovules lies along the margin of the ovary eg. pea & gram

ii) Parietal :- When the ovules develop on the inner wall of the ovary. Eg. mustard.

iii) Axile :- The placenta is axial and the ovules are attached to it . eg. onion & lemon.

iv) Free  central :- The ovules develop on the central axis while the septa are absent. eg. Dianthus, Primula.

v)  Basal :- The ovary in which the placenta develops from its base and a single ovule is found attached to its base.  eg. sunflower.